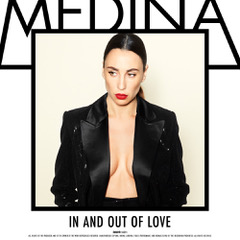 Danish singer-songwriter Medina is back with her infectious new single ‘In & Out of love’. The club song is build on her soulful vocals with a melancholic chorus, while keeping the production edgy and cool with electronic rhythms and effects. Following the millions of streams she had in recent years, the new single is a floor-filler and brings Medina back into the club universe, with a classic club tune.

Initially known for many popular releases in her native country, Medina has been the biggest female pop star coming from Denmark the last decade. Releasing several full albums since 2010, she is best known for her big hit ‘You & I’, which topped the charts in several countries upon release, which the widely supported
Deadmau5 remix of her single ‘You & I’ also did. Both were included on her debut album
“Welcome To Medina” which also included her popular single ‘Addiction’ (which hit #1 on Billboard’s Dance Airplay chart). She has also featured on the M-22 single ‘First Time’, which turned out to be a massive hit in 2019, and reached #20 on the UK Sales Chart and #20 on the UK Airplay chart, as well as #34 on the
Billboard Hot Dance Airplay chart. “First Time” has currently counted over 60 million Spotify streams and more than 100 million streams across platforms.

In between releasing different international singles, Medina has released several hit tracks in her native language, often characterized by strong pop hooks and her touching voice. Since 2013 she has relea-sed popular records like ‘Jalousi’, ‘Det Smukkeste’ and earlier this year’s ‘Større End Os’.

This summer Medina is going back to her club roots with a cool melancholic dance tune, that will take her right back into the clubs and the hearts of her fans and audience.

The song is written by Providers, Medinas long time producer collaborators, as well as songwriter Victoria Siff and Medina.

The song was written in the same studio were Medina recorded and wrote her previous hits including
“You & I”, “Addiction“, “Forever” and many more of her hits.